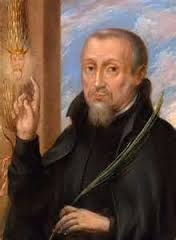 Summary: Robert Southwell was only thirty-three, “the same age as Jesus”, as he told his trial judge, when he was condemned to death under the reign of Queen Elizabeth I in England. He is one of the Forty Martyrs of England and Wales canonised by Pope Paul VI in 1970.

Early life
Robert was born at Horsham St. Faith in Norfolk, the youngest of eight children of Catholic gentry and educated first at Douai, then at Paris. He wished to join the Jesuits at seventeen, but was turned down because he was too young. He then walked to Rome, was admitted to the Jesuits there in 1578 and sent for his two-year novitiate to Tournai. He returned to Rome to complete his studies of philosophy and theology, was ordained priest in 1584 and then was made prefect of studies in the Venerable English College at Rome.

To England
In 1584 an act was passed forbidding any English-born subjects of Queen Elizabeth, who had entered into priests’ orders in the Roman Catholic Church since her accession, to remain in England longer than forty days on pain of death. But Southwell, asked to be sent to England in 1586 as a Jesuit missionary and the Jesuits agreed that he go with another Jesuit campanion Henry Garnett. Robert stayed with Catholic families, administering the sacraments and in 1589 became domestic chaplain to Ann Howard, whose husband, Philip Howard, Earl of Arundel (1557-95), was in prison, convicted of treason. It was to Philip Howard that Southwell addressed his Epistle of Comfort.

Arrest and imprisonment
After ministering successfully for six years, Southwell was arrested. His prison conditions were so wretched that his father petitioned Queen Elizabeth that he either be brought to trial and put to death, if found guilty, or removed in any case from the filthy hole he was in. He was then lodged in the Tower of London, and allowed clothes and a bible and the works of St Bernard. His imprisonment lasted for three years, during which he was tortured on ten occasions so that he might give evidence about other priests.. In 1595 he was charged with treason, and removed from the Tower to Newgate prison, where he was put in to a hole called Limbo.

His trial and execution
A few days later he was indicted as a traitor under the law mentioned above. Southwell admitted the facts but denied “entertaining any designs or plots against the queen or kingdom”. His only purpose, he said, had been to administer the sacraments according to the rite of the Catholic Church to those who desired them. When asked to enter a plea, he declared himself, “not guilty of any treason whatsoever”.  However, he was found guilty and next day, February 20, 1595, he was drawn in a cart to Tyburn. A notorious highwayman was being executed at the same time, at a different place – perhaps to draw the crowds away – but many people came to witness the priest’s death. He was allowed to address them at some length.  H 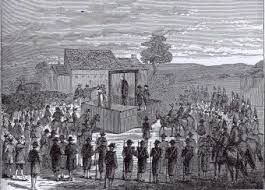 e confessed that he was a Jesuit priest and prayed for the salvation of the queen and his country. He then commended his soul to God with the words of the psalm In manus tuas. He was hanged, drawn and quartered.

His poetry and prose
During his imprisonment Southwell wrote many poems of high literary merit. His prose works, such as A Short Rule of Good Life, Triumphs over Death, Mary Magdalen’s Tears and A Humble Supplication to Queen Elizabeth, were religious tracts. He had no fear of death. He saw his sufferings as occasions of grace, an opportunity to express his love for God. He used his poetry and his religious tracts, which were widely circulated to stir up the same religious faith in others. Here are three well known quotations from his poems:

May never was the month of love,
For May is full of flowers;
But rather April, wet by kind,
For love is full of showers.”
from Love’s Servile Lot

O dying souls, behold your living spring;
O dazzled eyes, behold your sun of grace;
Dull ears, attend what word this Word doth bring;
Up, heavy hearts, with joy your joy embrace.
From death, from dark, from deafness, from despair:
This life, this light, this Word, this joy repairs.
…from The Nativity of Christ.