Summary: St Richard of Chichester was born in Droitwich the son of a yeoman, farmer in 1197, became a reforming bishop in England in the first half of the 13th century.- The hymn ‘Day by Day’ is attributed to him. He was generous in his charities and merciless towards simony and nepotism – became bishop of Chichester in 1233. He died in 1253 and was canonised in 1262.

The image ( on the right) shows the statue of Richard at Chichester  in front of the cathedral in West Sussex. He 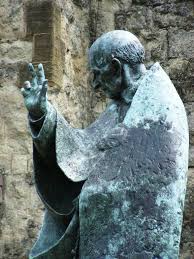 was a reforming bishop in England in the first half of the 13th century. The popular 1970 musical Godspell contains the beautiful hymn Day by Day attributed to him.
“Day by day, O Lord,
these three things I pray:
to see thee more clearly,
to love thee more dearly,
to follow more nearly,
day by day”.
Patrick Duffy records his life.

Ordained a priest 1243
Edmund quarrelled with King Henry III over the rights of the Church and went into exile in France. After Edmund’s death (1240), Richard studied for the priesthood with the Dominicans at Orleans and was ordained in 1243. He returned to England and worked as a parish priest until the new archbishop Boniface of Savoy asked him to resume his job as chancellor. The new archbishop also quarrelled with the king. He appointed Richard as bishop of Chichester when the king had appointed his own candidate. 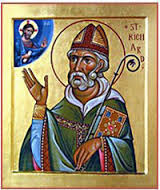 Consecrated bishop at Lyons by Pope Innocent IV
Pope Innocent IV upheld Richard’s appointment and consecrated him bishop at Lyons in 1245. Henry, however, confiscated all the diocesan property and decreed that no one should give him shelter. Richard returned to the diocese and lived in the house of one of his priests and visited his diocese on foot.

A reforming bishop of Chichester 1245-53
Eventually the king relented and Richard administered the diocese for seven and a half years. He was a reforming bishop, of simple personal habits, generous in his charities and merciless towards simony and nepotism. He provided suitable vicarages for his clergy, but insisted that they observe celibacy, say Mass reverently and instruct the people on the meaning of the sacraments.

Preached a crusade
Richard preached to raise volunteers for a crusade, but emphasised the spiritual aims of visiting the holy places.

Thanks be to my Lord Jesus Christ
for all the benefits thou hast given me,
for all the pains and insults thou hast borne for me.
O most merciful redeemer, friend and brother,
may I know thee more clearly,
love thee more dearly
and follow more nearly.