Summary:  Philastrius of Brescia is known especially for his strong defence of the Catholic faith against Arians and a catalogue of other heresies. He was the sixth bishop of Brescia, near Milan, and was known to Saints Ambrose and Augustine.

Patrick Duffy explores what is known about him.

From Spain or Africa?

According to a sermon preached on the 14th anniversary of his death by his successor at Brescia, St Gaudentius, an early significant event in the life of St Philastrius was a great act of renunciation, for which he is compared to Abraham. Did this involve leaving his homeland whether in Spain or Africa to come to Italy? Said to have been the sixth bishop of Brescia, Philastrius was born around 330 AD, became a priest at 30 and a bishop at 50.

Travels and preaching against heresies
After his ordination as a priest he travelled over nearly the whole Roman world (circumambiens universum pene ambitum Romani orbis), preaching against pagans, Jews, and heretics, and especially against the Arians. Like St. Paul he is said to have carried in his body the “marks” of Christ, having been scourged for his zeal against the Arians. At Milan he was a great support to the Catholic party in the time of St Ambrose’s predecessor, the Arian bishop Auxentius. At Rome he held both private and public disputations with heretics, and converted many.

Known to both Ambrose and Augustine
Philastrius was was known to both Ambrose and Augustine (Ep 222). He took part in the Synod of Aquileia in 381 which dealt with Arianism. Subsequently he composed a catalogue of heresies called Diversarum Hereseon Liber around 384 which is extant. Its relationship to The Panarion – a similar catalogue of heresies – of Saint Epiphanius of Salamis in Cyprus is debated. 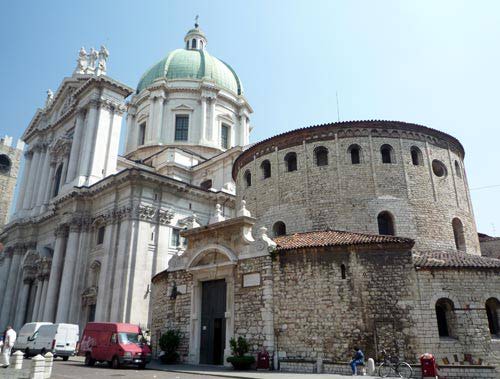 Inside the 12th century former cathedral in Brescia where St Philastrius’ body is kept, are Roman remains and an 8th century apse. Next to it is Brescia’s new Baroque cathedral.

Bishop of Brescia
In the homily of St Gaudentius cited above, Philastrius is said to have had a lively spirit, not given to anger, but always seeking to understand. Philastrius’s wanderings ceased when he was made Bishop of Brescia. As bishop he had a good knowledge of the faith and was devoted to the lowly and the poor. He was buried in the ancient cathedral of St Andrew at Brescia.