Summary: St Peter Damian, Bishop, Doctor of the Church. Born in Ravenna (Italy) in 1007; died on 22 February 1072. Became a hermit monk after a career as a professor. Ardent, energetic, and strict, an outspoken reformer of Church life and discipline. Appointed cardinal-bishop of Ostia, he became a diplomat and ecclesiastical statesman, a scholarly reformer devoted to Christ.

St Peter Damian (1007-72) was a hermit and scholar. He denounced clerical sex abuse. He was an influential reforming bishop and cardinal. Pope Leo XII declared him a doctor of the Church in 1828.

Early life
Peter was born at Ravenna into a large but poor family. He lost both his parents in childhood and while supposedly in the care of his brother was being treated as a slave. Another brother Damian was archpriest at Ravenna. He rescued Peter, gave him a good education in grammar, rhetoric and law at Faenza and Parma and Peter became a professor at Ravenna. In gratitude Peter took Damian as his second name. 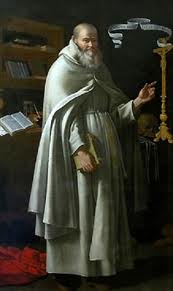 An Ascetic
Peter was already leading an ascetic life, fasting, wearing a hair shirt and using the discipline when he joined the Camaldolese Benedictine followers of St Romuald at Fonte Avellana. On the abbot’s death in 1043, Peter became the head of his community and founded five other hermitages. He was kind to his monks and compassionate towards the genuinely repentant, but he also urged reform both of wandering monks and the clergy.

No-nonsense reformer on behalf of the Popes
Because of his disciplined, blunt, and no-nonsense character, the popes of this period kept choosing him to carry out diplomatic missions: Pope St Leo IX (1049-54) chose him to preach against simony, clerical concubinage and sodomy. Pope Stephen IX (1057-58) made him cardinal-bishop of Ostia, near Rome, and apostolic administrator of the diocese of Gubbio. Nicholas II (1059-61) sent him to Milan to stamp out the buying and selling of clerical benefices there and in 1069 Alexander II (1061-73) sent him to Mainz in Germany to dissuade the young King Henry IV from divorcing his wife Bertha. 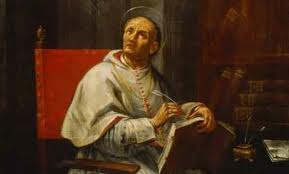 Around 1050, during the pontificate of Pope Leo IX, Peter published a treatise on the vices of the clergy entitled The Book of Gomorrah. He denounced as sinful all homosexual practices.  See www.ourladyswarriors.org/articles/damian1.htm. Not unlike writings on clerical abuse today, it got a mixed response. Another work, written around 1053, entitled Liber Gratissimus, upholding the validity of the orders of simoniacal clerics, though it also got a mixed reception at the time, had a powerful influence in resolving the question. He also was a notable poet; one of his poems praises St Gregory the Great as Anglorum iam apostolus.

Last mission and death
Peter’s final mission was to Ravenna where he was again successful. On his way back to Rome, he died of fever at Faenza. Never officially canonised, he was made a doctor of the Church by Pope Leo XII in 1828.