Summary of St Paulinus: Living among the leisurely aristocracy of the later Roman empire, Paulinus was first a married man who became a Christian as an adult, then was ordained priest by popular acclaim. He and his wife both embraced celibacy. He spent the last twenty two years of his life as Bishop of Nola in Campania, Italy.

Of a Roman senatorial family in Gaul

Born in Bourdeaux, France, of a Roman senatorial family, Paulinus’s father was the prefect of Gaul, but owned land also in Italy and Spain. Paulinus attended the school of rhetoric and poetry established at Bourdeaux by the poet and teacher Ausonius (310–395). He practised as a lawyer and held posts in the imperial administration.

Travels and marriage
Paulinus travelled widely. In 381 he became governor of Campania in Italy, but returned to Bourdeaux and married a Spanish wife, Therasia. After some years of pleasant leisure, they both became committed Christians and were baptised about 390.

Ordination in Barcelona
They went to live in Barcelona, Spain, where a son was born, but died in infancy. Soon after this, they began to give their wealth to the poor and to the Church. Perhaps because of this generosity, the people called for him to be ordained a priest – even though he was not a deacon and was not bonded to the diocese. The bishop of Barcelona agreed and he was ordained on Christmas Day 393.

Move to Nola in Campania
Paulinus and Therasia, however, moved on to Italy. He was welcomed in Milan by Ambrose, but not in Rome by Pope Siricius (384-399) since he had supported his rival for the papacy (St Jerome). The couple settled on an estate at Nola, near Naples, where they involved themselves in helping the needy and in public building works, including an aqueduct.

Monastic community and celibacy
They also set up a small monastic community as well as a hospice for the sick and for pilgrims to the shrine of the local saint, St Felix, who had been martyred in 255. They both opted to live as celibates and as hermits. 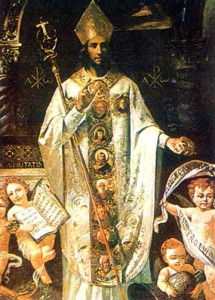 Bishop of Nola
When the local bishop died in 409, Paulinus was chosen to succeed him. He ruled with wisdom and generosity. He continued a scholarly life style, writing many poems and one for the feast of St Felix. He corresponded with many of the outstanding Christians of his time – Saints Martin of Tours, Ambrose, Augustine and Jerome. He also built and adorned with mosaics a church in honour of St Felix.

His death
Paulinus died after celebrating the Eucharist with two bishops and giving his final gift to the poor. He was buried in his own church at Nola. His relics were later taken to Rome, but restored to Nola in 1909 by Pope Pius X.