Patrick Duffy traces what the traditions are about this saint.

Extraordinary birth and rescue
Moling was born in 614 in Sliabh Luachra in Kerry. His mother was from Sliabh Luachra, but his father was the wealthy Faelán the Fair, probably from Leinster, who became infatuated with his wife’s sister, Eamhnaid, while she was visiting them in Leinster. When the girl got back home to Sliabh Luachra, in her shame she gave birth to her baby boy out in the snow – ‘prodigious snow, so that it reached men’s shoulders’, and was about to kill him. Fortunately, both mother and child were rescued by two monks Brénainn and Collanach his priest.

Education
Collanach baptised the boy, calling him Taircell. He brought him up at his school for sons of wise men and nobles. When Taircell had completed his own studies, he taught the other boys at the school. Collanach trained him for the priesthood and Brénainn said it was his destiny to found a dwelling (atrebh) at Rinn Ros Broic (“Badger’s wood point”) on the brink of the Barrow. Around this time his name changes to Moling as a result of three great leaps (Were these overcoming evil phantoms or tempatations that attacked him?)

St Mullins
On his journey to the Barrow to found his dwelling, Moling came to a place called Aghacainidh (“Kennedy’s Field”), where he established a monastery. A man of great physical strength and energy, he is renowned for cutting single-handed a mill-race a mile long (which can still be traced) for his community. He refused to wash or drink from it until it was completed. The place then came to be called Teach Moling (“The house of Moling”) and later in English, St Mullins.

Freed the Leinster men of the ború (“cattle tax”)
One of the great deeds attributed to St Moling is that in 674 he begged Finaghta the Festive to renounce solemnly for himself and his successors the ború (= “tribute”) or annual cattle tax which for generations the kings of Meath (at Tara) had exacted from the Leinstermen. This was regarded as a great feat by the Leinster men who greatly honoured Moling for it.

Moling and the foxes 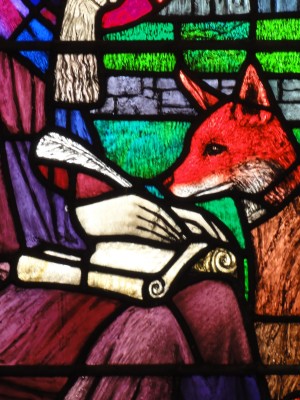 Moling, like St Francis, is said to have loved animals, many of whom – wild and tame – he kept around him in honour of their Maker, and they would eat out of his hand. Among them was a fox, who one day stole a hen that belonged to the monks and ate it. The monks complained to Moling, who scolded the fox. The fox, seeing his master’s anger, went off to the nearby convent, and brought back a hen and placed it, safe and sound, at Moling’s feet. Moling, smiling, said to the fox: ‘You offer plunder to atone for theft. Take back this hen unharmed to the sisters. And from now on you must live without stealing.’ The fox took the hen back to the nuns. Both monks and nuns rejoiced and blessed God.

The fox and the book
Another time a fox stole a book from the community and hid it, intending to come back shortly and chew it up. But when he came back to the monastery, the monks found the fox stealing and eating a honeycomb. They brought the fox to Moling, accusing him of stealing the book. Moling bade them let the fox go free, but he said  to the fox: ‘Be off, you crafty creature! Bring me back that book unharmed, and quickly.’ Off went the fox, brought back the book, setting it down at the saint’s feet, as if seeking forgiveness. ‘Get up, you wretch,’ said Moling, ‘and never touch a book again.’ Ever after, whenever any one would jokingly show the fox a book, he immeditely took to flight (Plummer, Latin Life of Moling).

Places where Moling is remembered
Moling is remembered in Brosna, Co Kerry, where St Moling’s well (restored  in 1998 by the Brosna Heritage Group) still draws pilgrims. The George Ashlin-designed Catholic church in the village, built in 1868, is dedicated to St Moling and St Carthage. 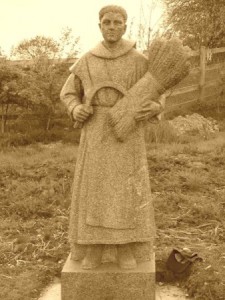 This statue of Saint Moling is just outside the town of Graignamanagh.

At St Mullins (in Irish, Teach Moling), Co Carlow, there is a large graveyard containing the remains of a small round tower, a range of small churches, one of which is said to contain Moling’s grave. There is also a well dedicated to him and people still point to the mile-long mill race Moling is said to have cut with his own hands.

At Monamolin (Irish Muine Moling = “thicket of Moling”), Co Wexford, not far from Ferns, the name of the village and the local Catholic Church commemorate the saint. There is also a story that when Moling was crossing a small hill here, an evil spirit annoyed him and that when he knelt on a rock to curse the spirit, the impression of his knees was left on the stone. Although this stone cannot now be traced, the townland is called Cloch na Mallacht, i.e. “the stone of the curses”. A St. Moling’s Well is situated on the parochial lands at Glebe.

The Book of Moling and its shrine
The Book of Moling is an Irish pocket Gospel Book from the last half of the 8th century preserved in Trinity College Library, Dublin. There is also a jeweled shrine, which was its container. The text includes the four Gospels, a service which includes the “Apostles’ Creed”, and a plan of St. Moling’s monastery. It has portraits of Matthew, Mark and John. It may have been copied from an autograph manuscript of St. Moling. 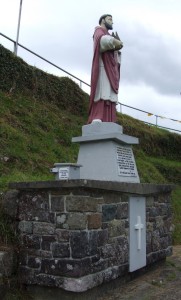 The one handed statue of Saint Moling and a poor box. This is a well on a substantial site in the middle of nowhere; but that is part of its rare beauty.

It contains a series of extraordinary stories that sound very strange to modern readers, but as the literary genre is medieval hagiography, and not modern biography, one needs to be versed in the peculiarities of that genre to correctly interpret it.

Presentation Sister Máire de Paor (Sister Declan of Bagnelstown) has analysed this text in a recent book, St Moling Luachra, giving an enlightening hypothesis of what the author was trying to convey through this genre of writing.