Summary: In many Irish churches you will see a stained glass window depicting Our Lord Jesus revealing his Sacred Heart to St Margaret Mary Alacoque. These windows bear witness to the enormous popularity of devotion to the Sacred Heart and the influence of St Margaret Mary Alacoque in spreading it. She is one of the Church’s most famous visionaries.

Patrick Duffy tells us about St Margaret Mary and her role in spreading the devotion. 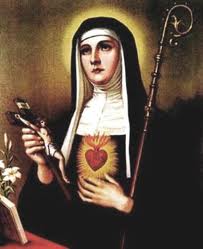 Born at L’Hautcourt in Burgundy, her father, Claude Alacoque, was a prosperous notary who died when she was eight. Margaret Mary was sent to school at a convent in Charolles. She liked the peace of the convent, and received he first communion at the age of nine. But the following year she developed rheumatic fever and was confined to bed for the next six years. When she returned home, she found her father’s relatives had moved in to the family home and treated her and her mother rather harshly. When her brother came of age, he took undisputed possession of the home and things improved.

Mary joins Visitation Sisters
After some consideration of marriage, at the age of twenty-four, she joined the Visitation Sisters (founded at Annecy by St Jane de Chantal) at their convent at Paray-le-Monial in 1671.

Personal revelations
From 1673 to 1675 she is said to have experienced a series of visions of Jesus. On 27 December 1673 – the feast of St John – Jesus appeared to her telling her his divine heart longed that the flame of the fire of its love should spread  through her to all men and to enrich them with its precious treasures. 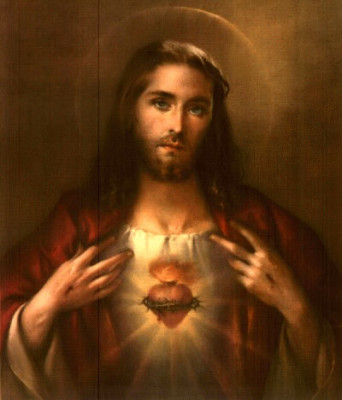 Suspicion
At first her superior treated the vision and the young nun with suspicion. She brought in a commission of enquiry that included a Jesuit and a Benedictine priest to investigate. They judged her to be a victim of delusions. This enquiry and its negative outcome caused Margaret Mary considerable anxiety and self doubt. But she bore this with patience and trust.

Judged genuine
However, in 1675 another Jesuit, Father Claude de la Colombière, became the community’s confessor, and after speaking to Sister Margaret Mary, he said he thought the visions were genuine. This encouraged Margaret Mary and the spread of the devotion, although Fr Claude was soon to go as chaplain to Queen Mary of Modena in London. 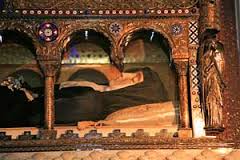 Death and influence
Margaret Mary died at the Paray-le-Monial on 17 October 1690 and, although there was considerable opposition to the public and liturgical devotion of the Sacred Heart especially in Jansenist milieus, it was officially recognized and approved by Pope Clement XIII in 1765, seventy-five years after her death. and in 1856 the feast of the Sacred Heart of Jesus was extended to the universal Church. Her spiritual director, Father Claude de la Colombière, was beatified by Pope Pius XI on June 16, 1929, and canonized by Pope John Paul II on May 31, 1992.