Summary of Macrina: belonged to a family of saints associated with the city of Caesarea in Cappadocia. Much of what we know about her and her family is from a treatise ‘On the soul and resurrection’, also known as the ‘Macriniae’, written by her younger brother, St Gregory of Nyssa.

A family of saints 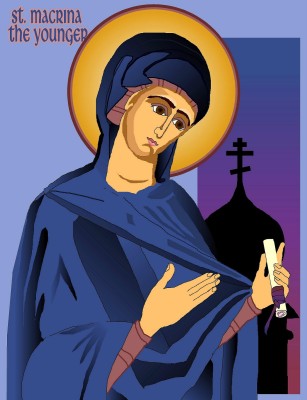 Her grandmother, St Macrina the Elder, had to flee with her husband during the Diocletian persecutions (303-4). Her parents, rhetorician Basil the Elder, and Emmelia, her mother, are honoured as saints as are four of her brothers – Basil of Caesarea (2 Jan), Gregory of Nyssa (9 Mar) and Peter of Sebaste and the monk Naucratius. Macrina was the eldest child of the family of ten.

Basil becomes a monk and bishop 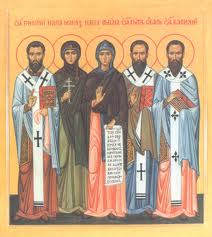 When Basil had finished his studies of rhetoric at Athens, he was rather full of himself. Macrina took him in hand and he soon gave up rhetoric and became a monk and went on eventually to become bishop of Caesarea. Macrina led the life of a consecrated virgin in the family home.

Gregory also
Gregory, five years younger than she, married and taught rhetoric, then (after his wife either died or became a nun) he became a monk and was appointed bishop of Nyssa in 371.

A religious community
When Macrina was about forty, her father died. She and her mother joined in setting up a religious community near Pontus, on the banks of the River Iris (northern Turkey). Macrina later became the leader of the community and its spiritual director.

Death and influence
Basil died in 379. Gregory, in grief for his brother, went to visit his sister. He had not seen her for eight years and now she was almost on her death bed. She consoled Gregory in his grief with thoughts of the resurrection, quoting John 12:24: “Unless the grain of wheat falls to the ground and dies, it remains just a single grain; but if it dies, it bears much fruit.” God’s abundance, she adds, makes many additions. Macrina was so poor when she died that Gregory had to provide a shroud in which to bury her.