Summary: St Mac Nissi, Bishop. Oengus Mac Nissi took his name from his mother Cnes or Ness. It is claimed that Patrick baptised him and taught him the psalms. He seems to be one of the early converts. He chose the district of Connor for his hermitage, but later became bishop of his clan. He died early in the sixth century.

Along with St Patrick,
St MacNissi is the co-patron of the diocese of Down and Connor.

Patrick Duffy tells what is known about St Aengus MacNissi.

Friend of St Colman of Dromore
He was a friend of St Colman, whom he advised to set up a monastery in Dromore. There is a legend that he had such a veneration for Scripture that he would not carry his Gospel book in a leather satchel, but carried it on his shoulders.

Patron of Down and Connor
Along with St Malachy, St MacNissi is patron of the Catholic diocese of Down and Connor. St MacNissi’s College was opened as a residential college at Garron Tower (see image) on the north-east Antrim coast in the 1950s and remained a prominent second level college in the diocese until 2010, when it amalgamated with two other Antrim schools to become St Killian’s College. 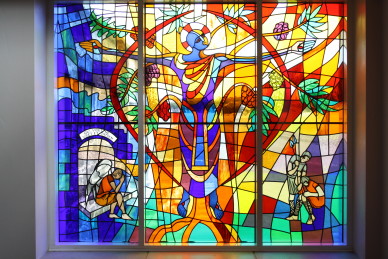