Summary: Pope Benedict XVI has said of St Ignatius: “He was first and foremost a man of God who in his life put God, his greatest glory and his greatest service, first”. Through his Spiritual Exercises, St Ignatius has shown how to discern where God is leading the disciple in apostolic spirituality. 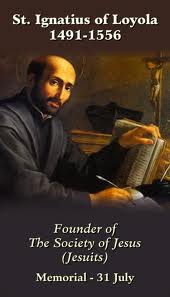 Iñigo was born at the castle of Loyola near Azpeitia in the Basque country of Spain. Baptised Iñigo after a local saint, Iñigo (Eneco) of Ona (d. 1057), the change in name seems to have occurred when he went to live in France and Italy. He was the youngest of thirteen – eight brothers and four sisters. Both his parents were of distinguished families, but his mother died when he was a child and his father when he was about sixteen.

A solitary
He was only seven years old in 1498 when Martin, his next to oldest brother and heir to the family estate, married Magdalena, and she took charge of the house of Loyola. Iñigo grew up alongside his brother’s children, probably distancing himself from them because he felt older and identifying with the adults, with whom he didn’t really fit in either. This may explain why basically he was a solitary man, who for most of his life was a searcher, a kind of wandering adventurer.

Arévalo
When he was fifteen he became a page in the house of the contador mayor (chief treasurer) to the Reyes Catolicos Ferdinand and Isabella, called Juan Velazquez de Cuellar, at Arévalo, between Avila and Valladolid. Here he received a courtly education, read books of chivalry and romance and was involved in all the usual escapades of a courtier. 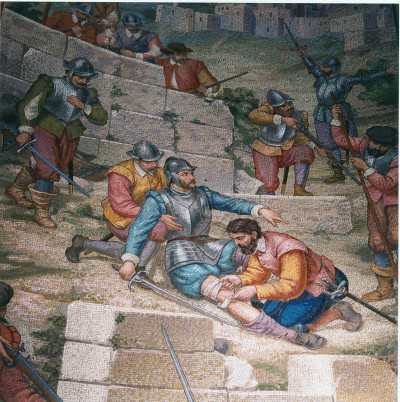 When King Ferdinand died in 1516, Velazquez de Cuellar lost his position. Iñigo went to Pamplona and spent five years in the army of the viceroy of Navarre, to whom he was related. In 1521 the French invaded Navarre and besieged Pamplona. Iñigo refused to surrender and was hit by a connon ball, which badly broke one leg and injured the other. Crude surgery made it worse and left him with a limp for life.

Convalescence
During his convalescence at home in Loyola, Iñigo asked to read novels of chivalry, but instead was given a copy of the Legenda Aurea (a book of lives of the saints) by James of Voragine. From the ideals of the saints like Francis and Dominic, he fantasised about becoming a knight of Christ. Doing penance was the start of this and he began to plan a pilgrimage to Jerusalem.

Montserrat and Manresa
Setting off for Jerusalem, he made a general confession at the monastery of Montserrat and seems to have been dissuaded from going further till he became more settled in his converted life. He spent ten months as a hermit at nearby Manresa, in prayer and penance. Here he experienced the alternations of desolation and consolation in prayer. He came away at peace and with the germs of the Spiritual Exercises in note form. It became a practical manual of apostolic spirituality. It shows the way for those who, like Iñigo, seek discernment as to where God is leading them and how to live “for the greater glory of God”.

Jerusalem
He did go on pilgrimage to Jerusalem (1523), begging as he went, but the Franciscans there dissuaded him from a project for converting Muslims, and he came back asking himself quid agendum? (Autobiography 50), what he ought now to do. Eventually he resolved to study, in order to be of greater help to others. He spent eleven years – one third of the remaining years of his life – studying.

Studying
Iñigo first went to Barcelona, then to Alcalá de Henares near Madrid, Salamanca and finally Paris (1528), where he studied philosphy for three years, graduating in 1534 as a master of arts. In Paris he gathered six disciples to whom he gave the Spiritual Exercises; they took vows of poverty and chastity and promised to serve the Church either by preaching in Palestine or in other ways the Pope thought fit. 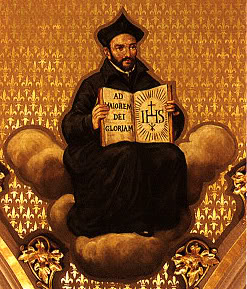 Rome
The companions met at Venice in 1537, but were unable to get to the Holy Land. So they went on to Rome, where they resolved to become a new religious order. By now they had all been ordained priests. They became involved in works of charity, such as teaching the young and uneducated, as well as in missions to the new colonies. Pope Paul III (Alessandro Farnese) (1534-49) approved the Society of Jesus. Ignatius was chosen as the first Superior General.

Expansion
For the next fifteen years he inspired and directed the expanding order. Francis Xavier sailed to Goa in 1541 and in 1549 was in Japan. Colleges were opened in major Italian cities, and in 1551 the Collegio Romano; this eventually became known as the Gregorian University (after Pope Gregory XIII Ugo Buoncompagni, 1572-85). Less than a decade after his death there were Jesuit colleges in Spain, Portugal, France, Germany, India, Brazil and Japan. 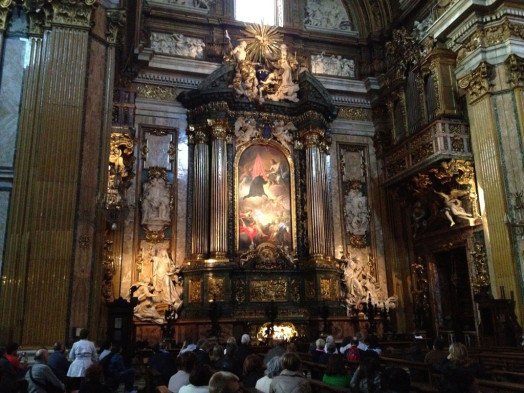 Ignatius died suddenly on 31 July 1556 and his remains were enshrined in what is now the Church of the Gesù in Rome. He was canonised in 1622 by Pope Gregory XV (Alessandro Ludovisi) along with Teresa of Avila, Philip Neri, Francis Xavier, and the humble St Isidore the farmer from Spain. With over 18,000 members, the Society is the largest religious order in the world.