Summary of St Hedwig: Born in 1374, Hedwig was betroth to the heir of Austria at the age of one and married to Jagiello when she was only twelve. She was later falsely denounced as an adulteress and a bigamist. She faced these slanders bravely and with faith. She worked endlessly for her people. In 1399 Hedwig died  four days after giving birth to a premature child who had died. Pope John Paul II canonised her some six hundred and twenty three years later in 1997. 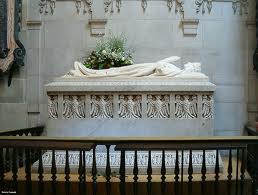 The tomb of Queen Hedwig lies in the Cathedral of Saints Wenceslas and Stanisalus on the Wawel Hill in Cracow. Through her marriage with Jagiello, duke of Lithuania, she was able to extend Christianity in the regions east of Poland and support the churches there. She was canonised by Pope John Paul II during his visit to Cracow in 1997.

Betrothal to the heir of Austria at the age of one
Hedwig (Jadwiga) was the daughter of the king of Hungary and Poland and when she was one year old she was betrothed to Wilhelm, the Hapsburg heir of Austria. She went to Vienna to learn the way of the Austrian court, but when her elder sister Catherine died, her father chose Hedwig as his heir to the throne of Hungary. He died when she was eight, but the Hungarians preferred her sister, Maria, who had already been accepted as queen of Poland by the nobles. Maria was then rejected by both countries and the archbishop of Krakow crowned Hedwig as “Jadwiga, king of Poland” (meaning she was the heir and not just the king’s consort) in 1384, when she was ten.

Married to Jagiello at twelve
The Polish nobles then set aside the vows made by proxy between her and Wilhelm and decided that she should marry Jagiello, duke of Lithuania and Ruthenia, who promised to become a Christian. The wedding took place in Krakow Cathedral in February 1386, after Jagiello and his brothers and the leading Lithuanian nobles were baptised. She was twelve and he was thirty-six. Jagiello was crowned king of Poland as Ladislaus (Władysław) II. As a monarch, young Hedwig probably had little actual power, but she was actively engaged in her kingdom’s political, diplomatic and cultural life and acted as the guarantor of Ladislaus’s promises to reclaim Poland’s lost territories.

Slanders
The Hapsburgs circulated rumours that she and Wilhelm had already consummated a marriage when he had visited her to persuade her to marry him. These rumours were spread abroad by the Teutonic Knights, and she was denounced as an adulteress and a bigamist. They were even repeated in the writings of the scholar Aeneas Silvius Piccolomini, who later became Pope Pius II (1458-64), and great damage was done to her reputation outside Poland. 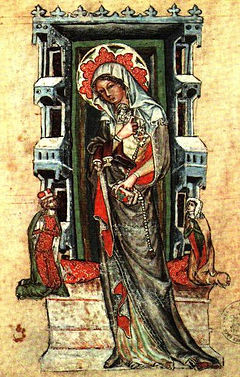 Christianisation of Lithuania
Jagiello/Ladislaus II decreed that the people of Lithuania should be baptised, and while not actually employing force, they were baptised even though the missionaries could not speak the language. A diocese was established in Vilnius and Hedwig supported it with church plate and vestments.

Ecumenism in Cracow
Hedwig also had the ambition to unite Latin and Orthodox Christians. To promote this, she brought monks from Prague who used a Slavonic rite. She also introduced a college of psalmists who took turns to sing psalms without interruption in the cathedral, except during services. She also organised perpetual adoration there. Although the Teutonic Knights invaded Lithuania, Hedwig sought always to negotiate a diplomatic peace.

Hedwig died in childbirth
In 1399 Hedwig was expecting a baby. The baby was born prematurely and died after three weeks. Hedwig herself died four days later. Jagiello continued to rule Poland as Ladislaus II until his death 35 years later.

Canonisation by Pope John Paul II in 1997
The cause for Hedwig’s canonisation was introduced in 1426, but she had to wait until the first Polish Pope, John Paul II, beatified her in 1986 and canonised her on his visit to Krakow in 1997.