Summary: St Gall set out as one of the companions of St Columbanus from Bangor to be missionaries for Christ in Gaul and Switzerland. A town in east Switzerland and a huge cathedral there bear his name, but he was not its founder. He remained a hermit. The monastery was founded later to house his relics.

Monk of Bangor
Patrick Duffy tells us that S 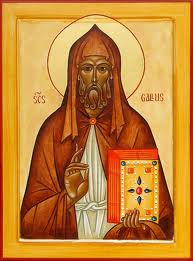 t Gall came from Leinster and was brought by his parents to Bangor in County Down to be trained in the monastery of St Comgall.

Peregrinnatio pro Christo
He set off for Europe as a missionary with St Columbanus and others in 573. They spent some time in the Vosges mountains area east of a line from Dijon to Lyons. They had monasteries at Annegray, Luxeuil and Fontaines. A quarrel with Theoderic of Burgundy led to them moving on to what is now Switzerland and they had monasteries by Lake Zurich and at Bregenz on Lake Constance. 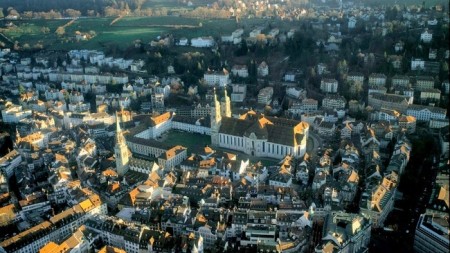 Here when he saw people worshipping bronze images, Gall broke them in pieces and threw them into the lake.

Separation
A rift grew between Columbanus and Gall – whether about fishing skills (Gall caught more fish) or about future plans. Columbanus decided in 612 to move on to Lombardy, Gall and a few monks stayed.  Gall pleaded a fever, but Columbanus felt he was malingering and lacked obedience, so he forbade him to say Mass again while he Columbanus lived. But before Columbanus died at Bobbio in 615, he asked that his pastoral staff be sent to Gall as a sign of forgiveness. 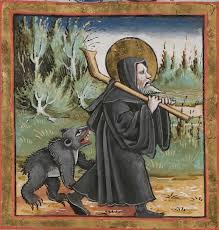 Gall the hermit
Although the monks of Luxeuil elected Gall as their abbot and a local king, Sigebert, offered him a bishopric, he declined both and chose to remain a hermit.

Influence
Gall did not found the monastery which carries his name and is now a cathedral town, St Gallen – it was a later Benedictine foundation built to guard his relics. He died in around 630. His name is listed in early ninth century martyrologies.

The bear
One story about him is that at his command a bear brought wood to feed the fire which Gall and his companions had kindled in the forest. In Alsace his feast 16 October was a marker for harvesting apples and bringing cows down from pasture to stable for the winter.