Summary : St Colmcille (or Columba) is one of the three patron saints of Ireland along with St Patrick and St Brigid. He initiated the movement known as the ‘peregrinatio pro Christo’ – emigration in adventure for Christ –  monks from Ireland going into voluntary exile and so becoming missionaries in Britain and the Europe. 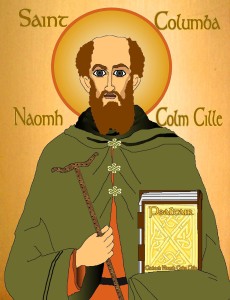 Colmcille was born at Gartan, Co Donegal and belonged to the Cenél Conaill, a branch of the Uí Néill dynasty. His father was Feidhlimidh and his great grandfather was Niall Naoi nGiallach who brought St Patrick as a slave to Ireland and gave his name to the Uí Néill. His mother was Eithne, a  princess  from Leinster where Christianity was well established.

Training as a bard
He was christened Criomhthann, meaning ‘fox’, and though he may have retained some fox-like traits, as a young boy he would often be found in prayer and so was soon given the name Colmcille (‘the dove of the church’). Fostered first to a holy man called Cruithnechan near Kilmacrennan, he then went to Leinster to a Christian bard called Gemman, which accounts for his later closeness to the filidh. 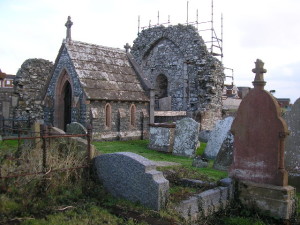 Training as a monk
Colmcille then went for monastic formation to St Finian’s monastery at Movilla on Strangford Lough, Co Down, where he studied theology and learned the art of copying and illuminating manuscripts. Here he became a deacon and later went on to complete his education with St Mobhi at Glasnevin, Enda of Aran and Finian of Clonard. Here he became friends with St Canice of Dungiven and St Comgall of Bangor.

His own foundations in Ireland
Ordained a priest around 546, Colmcille’s first monastic foundation was close to his home territory in Derry. His other major foundation in Ireland was at Durrow, Co Laois (both have the name doire, meaning “oak tree”). For the next seventeen years he continued teaching and preaching in Ireland. The other houses associated with his name may have been founded by monks of his community, either during his life-time or even centuries afterwards – Swords, Kells, Drumcliffe, Moone, and Tory Island.

Why did he go into exile?
In 563 Colmcille left Ireland and eventually settled on the island of Iona off the south-west corner of Mull, off Scotland. His biographer Adamnán tells us that two years after the battle of Cúl Dreimhne he went to Iona “wishing to be a pilgrim for Christ”. Adamnán’s method of dating his departure has led many to speculate on the reasons for his leaving and the causes of the battle. Most conclude that his exile was at least as political as it was religious. At Cúl Dreimhne in Co Sligo the northern Uí Néill fought with and defeated the forces of Diarmuid Mac Cearbhaill, the so-called high king, killing three thousand of his soldiers.

Iona 563
Colmcille remained in Scotland for most of his remaining thirty-four years. At the monastic settlement in Iona, he built up a large community devoted to prayer, study and physical work.

It also became a place of learning with the copying and illumination of manuscripts that produced the Cathach of Colmcille (a 6th century copy of the psalms 30-150) and others like the Book of Kells.

Visit to King of the Picts at Inverness
The Picts had been at war with the Scots for three years before Colmcille’s arrival. He evangelised at first among the Scots of Dal Riada. After two years he made a visit – with Canice of Dungiven and Comgall of Bangor – to meet the ruler of the northern Picts, King Bruide, at Inverness. While he did not convert the king, the visit confirmed his possession of Iona, brought more harmonious relations between the Picts and the Scots of Dal Riada and paved the way for the later spread of the gospel.

Convention of Druim Cett 575
Colmcille returned to Ireland a number of times, most notably for a convention at Druim Cett near Limavady, Co Derry, to sort out three items in which he had an interest:

A political interferer or a prayerful man in tune with nature and the poor
Hypercritical historians dismiss Colmcille as a political if pragmatic interferer, but Adamnán’s Life presents him as a kindly, prayerful man in tune with nature; he had a real interest in and practical concern for people, he cured the sick, helped rehabilitate the wayward, and provided the poor with the means of feeding themselves.

Death
Towards the end of his life, Colmcille spent his time transcribing books and writing poetry. His strength failed and even the monastery horse sensed this and began to mourn his approaching death. Colmcille died in the church just before Matins.

Influence
Colmcille’s influence dominated Ireland and northern Britain for many years after his death. Monks from Iona went to evangelise Northumbria and from there indirectly to other parts of England. Monks from Ireland – Columban, for example –  went into exile as ‘pilgrims for Christ’ bringing the gospel to the continent.

The three patrons of Ireland
Along with Patrick and Brigid, Colmcille is regarded as one of the three patron saints of Ireland. “As Patrick was a Briton by birth, and as Brighid probably originated as a pagan divinity, Colum Cille (Latin Columba) son of Feidhlimidh may justly be regarded as the single most important native Irish saint” (Pádraig Ó Riain, Dictionary, 211)