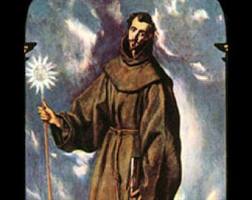 St Bernardine was a great Observant Franciscan preacher and an effective reformer of the 15th century.

There are some beautiful frescoes by Pinturichio (end 15th century) of the life of St Bernardine and the great Italian Renaissance painter Giotto. c/f image left<<<

Early life of service
Born at Massa Maritima, near Siena, Italy, where his father was governor, Bernardine was left an orphan at six. He was brought up by his aunt and given a broad education in grammar, rhetoric, canon law and theology. When the organisation in the city of Siena broke down during the plague, he and some companions took charge of the local La Scala hospital. Subsequently he nursed his bed-ridden aunt until she died.

An effective itinerant preacher
In 1417 Bernardine appeared as a spectacular preacher in Milan and from then on travelled all over Italy, especially in the kingdom of Naples, always on foot, preaching in the open air. He advocated penance and voluntary poverty in the spirit of St Francis but he is best remembered for his devotion to the Holy Name of Jesus. At the end of his sermons he would hold up a tablet or plaque on which the letters IHS (Greek capitals of the first three letters of the name of Jesus) were engraved and surrounded by rays of light. He used every trick of the rhetorical trade to move his hearers his listeners to both laughter and tears. He had enormous influence. He especially attacked the practice of usury. He also denounced the wars between the city states of Italy, the Guelph states supporting the Pope and Ghibelline states supporting the emperor, as the basic evil of the age. He preached vigorously against sodomy and wrote some works of theology and devotion.

On trial for idolatry
A Dominican theological opponent, Manfred of Vercelli, accused Bernardine of idolatry and he was called to appear before Pope Martin V. The Pope received him coldly and forbade him to preach or display his tablet or plaque until his conduct had been examined. Bernardine humbly submitted, his sermons and writings being handed over to a commission. His trial took place  in the Pope’s presence at 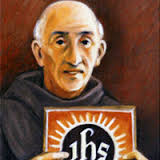 St. Peter’s. St John Capistrano spoke in the Bernardine’s defence. The charges against Bernardine were shown to be malicious and foolish and not only was the saint’s teaching justified and commended, but Pope Martin urged him to preach in Rome. He was also offered three episcopal sees in turn – Siena, Ferrara and Urbino – all of which he declined.

Vicar General of the Observant Franciscans 1437-43
In 1437 Bernardine became the vicar general of the Observant Franciscans and there was a great growth in the numbers who joined – from 130 to 4,000 in his lifetime. He also was involved in setting up schools of theology and writing the statutes for the Observants to reform the order. He sent missionaries to different part of the Orient and was responsible for many ambassadors coming from there to the Council of Florence (1439-45).

Later years and death
In 1443 Bernardine resigned and went back to preaching around Italy, but now moved around on a donkey. He preached in his home town of Massa Maritima on 50 consecutive days. He then set out for Naples, preaching as he went, but died in 1441 at Aquila, where he was buried and became famous for his miracles. Six years later in 1450 Pope Nicholas canonised him. There are some beautiful frescoes of his life by Pinturichio (end 15th century) in the Church of Santa Maria in Aracoeli in Rome.