Summary: St Anthony of Padua: Priest and doctor of the Church. Born in Lisbon (Portugal) in 1195; died at Padua (Italy) on this day in 1231. At first an Augustinian priest and scholar, then became a Franciscan to do missionary work in north Africa but this was thwarted by illness. Instead, he became a teacher of theology and a brilliant popular preacher in southern France and Italy, a servant of the poor, and a worker of miracles. 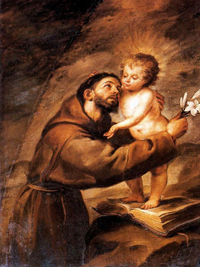 The love of Jesus, the desire to tell others about him, humility and eloquence as well as his role in answer to prayer for the recovery of lost objects are the marks of the life of and devotion to St Anthony. He was originally from Lisbon, Portugal, but joined the Franciscans and died in Padua, Italy.

Born in Lisbon: baptised Fernando
Born into a noble family beside the cathedral in Lisbon and baptised Fernando, he was educated at the cathedral school. At the age of fifteen he joined the Augustinian Abbey of St Vincent. Here he became well-versed in the classical writers, the Scriptures and the Fathers of the Church. As friends were constantly coming to visit him, he asked to move to the Santa Cruz monastery at Coimbra, then the capital of Portugal.

Ordained 1219
After ordination 1219 Fernando was put in charge of hospitality in his community and in this role he came in contact with five Franciscans who were on their way to Morocco to preach to Muslims there. Next year these five Franciscans were martyred in Morocco and their relics brought back to Portugal.

Joins the Franciscans and goes to Morocco
Fernando was so taken with the heroism of these five Franciscans that he asked to join the Franciscan order. He was received and given the name Anthony after the great hermit of Egypt (251-256).  Soon after this he sailed with another brother to Morocco to preach to the Muslims. However, he became sick and his ship had to head back home.

To Italy
But a storm blew the ship off course and, instead of going back to Portugal, they landed in Sicily. Here Anthony joined with some Franciscans who were heading to Assisi for a general meeting of the order. Here he met St Francis and was appointed to a hermitage at Montepaolo where he served as a priest to the hermits there. No one knew of his considerable learning and Anthony was happy to carry out the most menial tasks for the hermits and devote himself to prayer.

Fame as a preacher and teacher
Around this time (1222) the provincial brought Anthony with him to an ordination of some Franciscans and Dominicans at Forlì. When the Dominican preacher did not turn up, they asked Anthony to say a few words. Beginning tentatively, it soon became clear that here was a man of extraordinary knowledge, eloquence and enthusiasm. But it was especially his holiness that moved those present. As a result he was asked to preach more widely. Francis wrote to him appointing him as the order’s first lector in theology. The tone of the letter shows Francis was quite cautious about learning and theology. It said: “It pleases me that you read theology to the friars, provided that this pursuit will not quench the spirit of holy prayer and devotion according to our rule. Farewell.”

In northern Italy and southern France
Anthony taught and preached first in northern Italy and then in the south of France, where he went to assist in the crusade against the Albigensian heresy, preaching and teaching in the churches and market-places of Le Puy, Toulouse, Montpellier and Arles. The power of this preaching earned him the nickname malleus haereticorum, “the hammer of heretics”.

Anthony spoke in a loud, clear voice. He had a winning manner and a wonderful memory. Although he spoke out against luxury, greed and tyranny, he did so positively by presenting the beauty of the Christian way.

He returned to Italy in 1226 and became provincial of the Franciscans in northern Italy. Around Easter in 1228, he went to Rome, where he preached before Pope Gregory IX and discussed with him the Rule and Testament of St Francis. This was around the time Francis was canonised. 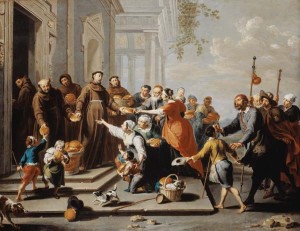 Final years and death at Padua
Anthony spent his last years at Padua where he had extraordinary influence both in the religious and civic life of town, reducing crime, denouncing usury, freeing debtors from prison, feeding the poor,  and reconciling enemies. He died in Padua aged only 36 and was canonised by Pope Gregory IX less than a year after his death. A large Renaissance basilica built over his tomb has become an international shrine visited by over 5 million pilgrims annually.

In art and devotion 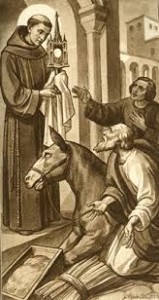 Artists frequently depict Anthony with the child Jesus on his arm or even with the child Jesus standing on a book (the Bible?) which the saint holds. He is also pictured preaching to the fishes (like Francis to the birds). Some suggest that this was because humans didn’t always listen to him. In Padua a bas-relief shows a mule kneeling down in front of the saint holding the Blessed Sacrament and rejecting a bundle of hay.

Prayer for the recovery of lost objects
Since the 17th century people have being praying to St Anthony to recover lost objects. This stems from the story that a novice borrowed Anthony’s psalter without permission and had to return it because of a fearful apparition of Anthony looking for his psalter!

His writings
The texts of many of Anthony’s sermons survive: for these and his reputation as a biblical scholar, in 1946 Pope Pius XII named him a Doctor of the Church.