Summary: St Anselm: bishop and doctor of the church, died at Canterbury (England) on this day in 1109. A monk at Bec (Normandy) where he taught theology and devoted himself to the spiritual life. Later, as archbishop of Canterbury, his bitter disputes with the king resulted in his being exiled twice. He is remembered for his theological learning and writings and for organising Church life in England. 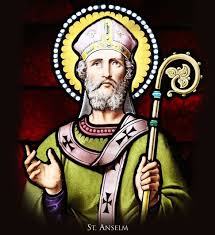 Anselm is probably best known for his motto which sets out the purpose of theology, namely, fides quaerens intellectum ( faith seeking understanding) . But he was also a monk, abbot and holy man, who became archbishop of Canterbury during the difficult times of lay investiture. He stood up strongly to King William II (Rufus 1087-1100) of England.

His early life
Anselm was born in Aosta, Lombardy in north-east Italy, into a land-owning family. While his father was rough and spendthrift, his mother was gentle and pious. Anselm at fifteen wanted to become a monk, but as his father would not agree, he was not accepted. Disappointed he gave up his studies. When his mother died and his father’s harshness became unbearable, Anselm left home and wandered through Burgundy and France, where his mother had relatives.

Student and monk at Bec
Moving on to Normandy, Anselm was attracted by the fame of his fellow Lombard, Lanfranc, who was then prior of the Benedictine abbey of Bec. Anselm went to study there, first as a secular student, and later as a monk. When Lanfranc was made prior at Caen (1063), Anselm at the age of thirty was elected prior at Bec. The monastery soon developed into an important seat of learning.

Philosophical writings
During his time at Bec Anselm wrote his works of philosophy, the Monologion (1076) and the Proslogion (1077–8), the latter being famous for its ontological argument for the existence of God. He also wrote four philosophical dialogues: De grammatico (which is a work on Logic), De veritate (On Truth), De libertate arbitrii (On freedom of Choice), and De casu diaboli (The Fall of the Devil)

Abbot at Bec
When Herluin, the first abbot and founder of Bec, died in 1078, Anselm was elected abbot by uninimous vote of the community. He combined the spiritual and temporal demands of leadership, being a loving father to his monks and expanding the abbey’s lands to good use. He became well known for his insight into human nature, the virtues and vices, but also for his devotion and asceticism. Anselm occasionally visited England to view property the abbey had acquired there, as well as to visit Lanfranc, who had now become archbishop of Canterbury. 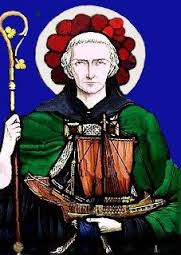 Archbishop at Canterbury and conflict with the kings
When Lanfranc died in 1089, Anselm was the obvious choice to succeed him. But the king, William Rufus, prevaricated for four years. During this time the king strove to appropriate church lands, offices, and incomes. Eventually in 1093 when he became ill, Rufus did nominate Anselm, but they were constantly at loggerheads over lay investiture.

Exile and Return
In 1097 Anselm went into exile first in France and then to Rome, where Pope Urban II not only supported Anselm’s position, but declined his request to be relieved of his office. In the controversies with the Eastern Church which followed the split of 1054 Urban made use of Anselm’s visit to help him defend the Western insertion of Filioque in the Creed and the use of unleavened bread in the West against representatives of the Greek Church at a provincial council at Bari. When King William Rufus died in 1100, Anselm returned to England, but he was again in conflict with the new king, Henry I, over lay investiture. In 1103 he once again travelled to Rome. Pope Paschal II again decided in Anselm’s favour, but the king forbade him to return to England. However, eventually there was reconciliation just before Anselm died in 1109.

Jurisdiction over Dublin
During the Norse occupation of Dublin, those who became bishops there looked more to Canterbury for their jurisdiction and their ordination than to Ireland, as until the Synod of Rath Breasail (1111) there was no real diocesan structure in Ireland and Dublin did not join that until the Synod of Kells (1152). Lanfranc ordained Giolla Patrick (1074-1084) and Donngus (1084-95), both Benedictines as bishops for Dublin. Anselm ordained Bishop Samuel Ua hAingli (1096-1121), who may also have become a Benedictine. His tomb is still to be seen in the Church of St Michan’s (Church of Ireland Anglican Communion) Church today. In a charter of 1101, Anselm refers to  himself as “Archbishop of Canterbury and primate of Great Britain and Ireland and vicar of the High Pontiff Paschal”. 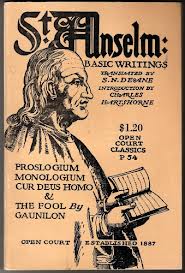 Cur Deus homo?
Anslem’s best known work Cur Deus homo? (“Why did God become man?”) puts forward what is called the satisfaction theory of redemption. Since the satisfaction due to God as a result of original sin was greater than what all created beings were capable of doing, God had to make satisfaction for himself. Yet if this satisfaction was going to avail for humans, it had to be made by a human. Therefore only a being that was both God and man could satisfy God and give him the honour that is due him.

Influence
Anselm’s biography was written by the Anglo-Saxon monk Eadmer, who had been his friend and disciple. Though Becket tried to have him canonised, Anselm was never officially made a saint, but Pope Clement XI declared him a doctor of the Roman Catholic Church in 1720, and is he considered a saint by the Roman Catholic Church and the churches in the Anglican Communion.

Fides quaerens intellectum
Anselm’s theological motto, fides quaerens intellectum (“faith seeking understanding”), has become the basis and indeed a definition for all theological enquiry: it is inspired by the text of 1 Peter 3:15: “Always be prepared to give an answer to everyone who asks you to give the reason for the hope that you have”. He died on Palm Sunday 1109 wile one of the monks read the Gospel to him.