Summary: St Andrew of Crete (7th Century) is recognised as a great theologian, homilist, and hymnographer.

Patrick Duffy tells what is known about St Andrew. 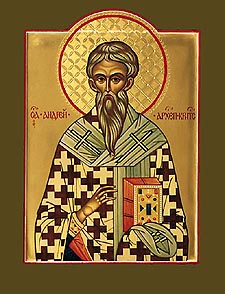 Saint Andrew was born in the city of Damascus into a pious Christian family. Up until seven years of age the boy was mute and did not talk. His parents took him to church and he received Communion. He found the gift of speech and began to speak. And from that time the lad began earnestly to study Holy Scripture and the discipline of theology.

At the age of fifteen he went to Jerusalem, entered the monastery of St Sabba, and

At fourteen years of age he went off to Jerusalem and there he accepted monastic tonsure at the monastery of Saint Sava(Sabba) the Sanctified. When he was aged twenty he worked as secretary for Theodore, Bishop of Jerusalem. He led a strict and chaste life, he was meek and abstinent, such that all were amazed at his virtue and reasoning of mind. As a man of talent and known for his virtuous life, over the passage of time he came to be numbered among the Jerusalem clergy and was appointed a secretary for the Patriarchate — a writing clerk. In the year 680 the locum tenens of the Jerusalem Patriarchate, Theodore, included archdeacon Andrew among the representatives of the Holy City sent to the Sixth Ecumenical Council at Constantinople, and here the saint contended against heretical teachings, relying upon his profound knowledge of Orthodox doctrine.

Writer of hymns and sermons
In his new position he shone forth as a true luminary of the Church, a great hierarch — a theologian, teacher and hymnographer. He  wrote many liturgical hymns. He was the originator of a new liturgical form — the canon. Of the canons composed by him the best known is the Great Penitential Canon. Andrew is best known for the Great Canon of Repentance. Many of his sermons are contained in the Office of Readings in the Liturgy of the Hours. 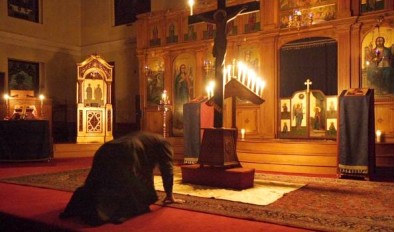 Date of death
Church historians are not of the same opinion as to the date of death of the saint.  He died on the island of Mytilene, while returning to Crete from Constantinople, where he had been on churchly business. His relics were transferred to Constantinople.

Intercessions
Intercessory prayers in some Eastern litanies, especially those with a repentance theme, are often addressed to St Andrew of Crete, such as: