Summary : Ss Andrew Dung Lac and companions, Martyrs. Andrew (1795-1839), were beheaded at Hanoi and are listed among 117 canonised martyrs who died in Vietnam between 1820 and 1862:ninety-six Vietnamese, eleven Spanish Dominicans, and ten presbyters from the Paris Foreign Mission Society. They are honoured as representatives of the thousands of Christians tortured and martyred in Vietnam between the seventeenth and nineteenth centuries: clergy and lay people, children and adults.

Andrew Dung-Lac, martyr(1795-1839) was  baptised at the age of fifteen, worked first as a lay missionary and then as a diocesan presbyter before being beheaded at Hanoi (Vietnam). He along with a brother priest was tortured and beheaded under the emperor Ming-Mang in 1839. They were canonised by Pope John Paul II in Rome on 19th June 1988 along with 115 other notable martyrs – both foreign and indigenous – from the 17th to the 19th centuries.

Vietnam
Vietnam is the easternmost country on the Indochina Peninsula in Southeast Asia. The traditional religion of Vietnam is Buddhism, along with elements of Taoism, Confucianism and local ancestors’ cult. 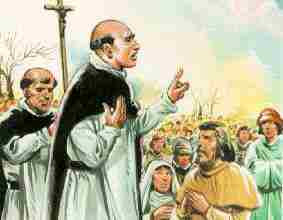 Portuguese Dominican missionaries began to arrive in Vietnam in the early 16th century and there must have been conflict with local power groups from the very beginning. The mission had some success when the Jesuits joined the Dominicans. Among the earliest martyrs were Spanish Dominicans, Francisco Gil de Federich, who had a fruitful apostolate during nine years in prison, and Alonzo Lenziana, who as a fugitive for thirteen years, ministered faithfully but secretly to the native Christians. During the 17th and 18th centuries, it is believed that up to 100,000 Christians were martyred.

The process of beatification and canonisation gathered 117 of  the best documented cases. Of that group, 96 were Vietnamese, 11 Spaniards, and 10 French. There were 8 bishops, 50 priests, and 59 lay Catholics in the group. Of the 50 priests, 11 were Dominicans, 10 belonged to the Paris Foreign Mission Society, and the rest were diocesan priests, along with one seminarian.

Among those who came in for special mention during the canonisation by Pope John Paul II on 19th June 1988 were:
Andrew Dung-Lac, a diocesan priest;
Thomas Tran-Van-Thien, a seminarian;
Emmanuel Le-Van-Pung, the father of a family;
two Dominican bishops Jerome Hermosilla and Valentine Berrio-Ochoa; and Théophane Vénard, a priest of the Paris Foreign Mission Society, whose letters inspired St Thérèse of Lisieux to want to be a missionary. 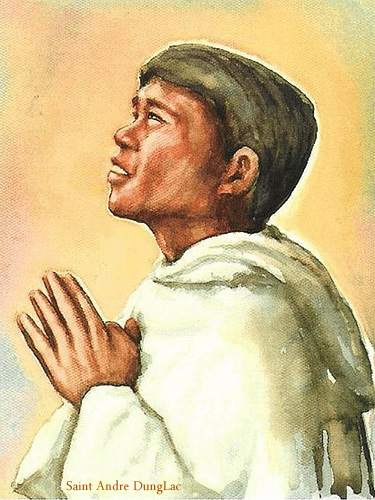 Andrew Dung-Lac
Originally called Dung An Trân, Andrew was born about 1795 into a poor and pagan family in Bac-Ninh in North Vietnam. When he was twelve the family had to move to Hanoi so his parents could find work. There he met a catechist who gave him food and shelter, as well as education in the Christian faith for three years. He was baptised with the Christian name Andrew (Andrew Dung). After learning Chinese and Latin he himself became a catechist, and taught catechesis in the country. Chosen to study theology, he was ordained a priest on 15th March 1823. As parish priest he was tireless in his preaching. He often fasted and lived a simple and moral life that was so good an example to the people that many were baptised.

In 1835 he was imprisoned under emperor Minh-Mang’s persecutions (he was called Vietnam’s emperor Nero), but his freedom was purchased by donations from members of the congregation he served. To avoid persecutions he changed his name to Lac (Andrew Lac) and moved to another prefecture to continue his work. But in 1839 he was again arrested with another Vietnamese priest Peter Thi, to whom he gone visiting so that he could go to confession. Once again the people paid money so that he and Peter could be released. However, their freedom was brief. They were soon re-arrested, taken to Hanoi, where both suffered a dreadful torture and were finally beheaded on 21st December 1839.

The Church in Vietnam today 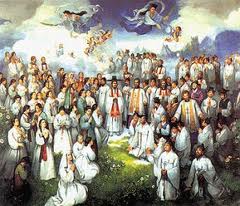 One of the heroes of the Catholic Church in Vietnam in recent years has been Cardinal François-Xavier Nguyen van Thuan, who, after spending 13 years in prison there, came to live in Rome where he died in 2002. In 2007 Pope Benedict approved the introduction of his cause for beatification.

Today there are 26 Catholic dioceses in Vietnam. There are 2228 parishes and 2668 priests. Catholics are about 7% of the 85 million population.