Summary of St Andrew Corsini: Although rather wild in his youth, Andrew joined the Carmelites and in later life was noted for his penance and his love of the poor.

Patrick Duffy tells us what is known about him. 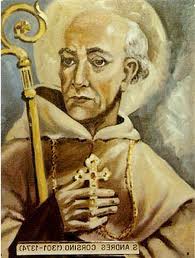 Andrew was a member of the noble Florentine family of the Corsini. Rather dissolute as a youth, he repented when he at seventeen his mother told him of a strange dream she had before his birth. She dreamt she had given birth to a wolf that became a lamb on entering a Carmelite church. He asked to be admitted to the Carmelite order. When he was ordained priest in 1328, he offered his first Mass in a hermitage so as to avoid the customary family celebrations.

His priesthood
After a short time in Florence Andrew went to Paris for further studies and completed them at Avignon where his uncle was a cardinal. Back in Florence, he was chosen prior of the Carmelite community there. He acquired a reputation as a preacher and as having the gift of healing of soul and body. One spectacular conversion was that of his cousin, a notorious gambler. Andrew was appointed provincial of Tuscany at the general chapter in Metz in 1348.

Bishop of Fiesole and peacemaker
When the bishop of Fiesole died in 1360, Andrew was chosen as his successor. Here he devoted himself to the poor. He had a talent for making peace between warring political factions. Because of this, Pope Urban V appointed him as nuncio to Bologna, where there was strife between the nobility and the ordinary citizens. His family connections made him acceptable to the nobility and his life of poverty endeared him to the poor and he succeeded in bringing peace.

On his return to Fiesole, Andrew became ill on Christmas Day 1372 and died on 6 January 1373. He was buried in the Carmelite church in Florence. Miracles so multiplied at his death that the pope permitted a public cult quite quickly after he died; but it was only in 1629 that Pope Urban VIII (Maffeo Barberini 1623-44) canonized him. In the early eighteenth century, Pope Clement XII, born Lorenzo Corsini, erected in the Roman Basilica of St. John Lateran a magnificent chapel dedicated to his 14th century kinsman. 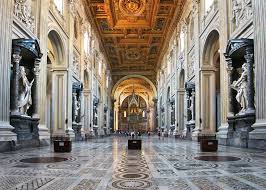