St Agnes, Virgin and Martyr. Agnes died at Rome, perhaps in the early fourth century. One of the most widely venerated of the Roman martyrs. According to early accounts, she gave her life to preserve her virginity consecrated to Christ. Named in Eucharistic Prayer I (The Roman Canon). 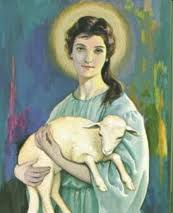 Patrick Duffy traces what is known about her.

Agnes chose Christ as her spouse and refused to worship the gods of the Roman culture. Her name is mentioned in the Roman Canon (First Eucharistic Prayer) of the Mass – an indicator of veneration at an early date. She is often depicted in art with a lamb (Latin agnus). The name Agnes is actually derived from the feminine Greek adjective “hagnē” (‘Aγνή) meaning “chaste, pure, sacred”. In Latin, it is associated with agnus, the word for “lamb”.

Early veneration
Agnes, like Fabian and Sebastian (20 Jan), also has a commemoration in the Depositio Martyrum Calendar of Filocalus (354) and in the early Roman Sacramentaries. Her name is also included in the Roman Canon (old First Eucharistic Prayer) and she is praised in the writings of Ambrose, Damasus, Jerome and Prudentius.

Christ her only spouse
The story from the 5th century Acta is that this beautiful 13 year-old girl from a noble and wealthy Roman family had many suitors but rejected them all, saying Christ would be her only spouse. Some of her suitors denounced her to the pagan authorities as a Christian. She was then asked to make the offering of incense to the Roman gods, which she considered idols. When she refused, she was put into a public brothel, but showed such steadfastness that no one would touch her.

Her throat cut
The governor condemned her to death by having her throat cut. This took place in the Stadium of Domitian, now Piazza Navona, where there is a church – Sant’Agnese in Agone, named after her. St Ambrose wrote of her: “She went to her place of execution more cheerfully than others go to a wedding.” 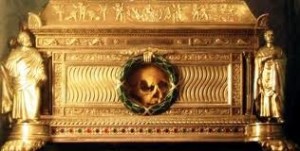 Her body was buried in a catacomb a short distance from Rome, near the Via Nomentana, where the church Sant’Agnese fuori le mura was built in her honour.

Free Woman
Although sometimes in the past virginity has been idealised and exalted to the lessening of the sanctity of married women, the following comment of Robert Ellsberg, in his book Blessed among all women: women saints prophets and witnesses for our time, is worth noting:

In the story of Agnes the opposition is not between sex and virginity. The conflict is between a young woman’s power in Christ to define her own identity versus a patriarchal culture’s claim to identify her in terms of her sexuality. According to the view shared by her “suitors” and the state, if she would not be one man’s wife, she might as well be every man’s whore. Failing these options, she might as well be dead. Agnes did not choose death. She chose not to worship the gods of her culture. The God she worshipped set an altogether different value on her body, her identity, and her human worth. Espoused to Christ, she was beyond the power of any man to ‘have his way with her’. ‘Virgin’ in this case is another way of saying Free Woman.

The Pallium for Archbishops
The similarity of her name to agnus (“lamb”) has led to her being depicted with a lamb in mosaics (eg, in the 6th century Basilica of Sant’Apollinare in Ravenna) and in stained glass windows. On her feast day at Rome, lambs are blessed that produce the wool from which the pallia for archbishops are woven by the nuns of St Agnes’s convent.