Summary: When the Desmond Rebellion was put down in Munster in 1583, Dominic Collins of Youghal, Ireland became a professional soldier in the Catholic armies of Europe. Ten years later he joined the Jesuits in Santiago de Compostela. He was sent back to Ireland in 1601 as a companion to Fr James Archer SJ with the Spaniards going to Kinsale, he was eventually captured and put to death for his faith.

Early life: a soldier of fortune

Dominic Collins was born into a leading Catholic family in Youghal, Co Cork, in 1566. Both his father and his brother served as mayor in the town and he may have attended the Jesuit school set up in the town in 1577.

The local people recognised Elizabeth of England as Queen in Ireland, but did not want Anglicanism as the new religion. So when the Desmond Rebellion was crushed (1583), there was little else for a young Catholic man of ambition to do but to seek a career on the continent. Sailing to France, Dominic enlisted in the Catholic army of the Duke of Mercoeur and quickly became a military governor. He later transferred to the Spanish army and was in the garrison at La Coruña.

Joins the Jesuits
Here in 1598 he met the Jesuit priest, Father Thomas White from Clonmel, who had earlier founded the Irish College at Salamanca and had come to La Coruña to hear the confessions of Irish soldiers during Lent. Dominic confided in Fr White his intention of joining the Jesuits. Fr White explained the difficulties of studies for the priesthood. Dominic said was happy to be a Jesuit brother.

The Jesuits were reluctant to accept him, feeling that a battle-hardened soldier would not settle into religious life, but Dominic persevered and was admitted to the novitiate in Santiago de Compostela. Here he proved his mettle when the Jesuit College was struck by a plague. Dominic tended the victims, nursing some of them back to health and comforting the others in their last hours.

A report sent to Rome at this time describes him as a man of sound judgement and great physical strength, mature, prudent and sociable, though inclined to be hot-tempered and obstinate.

Battle of Kinsale
At this time Ireland was in turmoil. O’Neill and O’Donnell had revolted in Ulster and in 1601 King Philip III of Spain decided to send an army to help them. An Irish Jesuit, Father James Archer, who was acting as O’Neill’s envoy with Rome and Spain, asked that Dominic, who knew the needs of soldiers, be sent with him to Ireland. 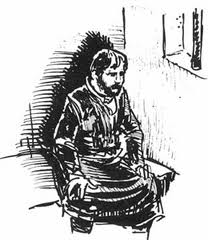 Siege of Dunboy Castle
After the shock defeat of the Irish and the Spanish at the Battle of Kinsale, Fr Archer went back to Spain. Dominic went with O’Sullivan Beare’s men to the Beara peninsula and was along with a group of 143 soldiers under the command of Richard McGeoghegan, who took refuge inside Dunboy Castle. This was a small square fortress on the mainland overlooking Beare Island. Here Lord Carew, the president of Munster and an army of 4,000 soldiers besieged them for several months.

During the siege, Dominic, though a veteran of many battles, could not as a religious take part in the fighting, but he could and did give bodily and spiritual assistance to the wounded and the dying. Knowing too how keen Carew would be to capture a Jesuit, he thought that by handing himself over as a hostage he could negotiate an honourable cease-fire. But Carew refused any negotiations and the besieged surrendered. Carew ordered Dominic and two others to be kept prisoners while the rest were hanged in the market-place, fifty-eight on that day, and the remaining twelve four days later. A plaque on the ruins of Dunboy Castle today commemorates their brave struggle.

Interrogation and torture
The three surviving prisoners were brought to Cork for interrogation. As the other two had little to reveal, they were soon executed. But Carew interrogated Collins, hoping he could persuade him to become a Protestant and thus gain a propaganda victory.  He alternately tortured Dominic and made him primises of preferment to high ecclesiastical office. Some of Dominic’s own family visited him, urging him to save his life by pretending a conversion which he could afterwards repudiate. But Dominic would have none of it, and clearly made a choice of a martyr’s death.

Martyrdom
Taken to Youghal on 31st October 1602, he was marched by a troop of soldiers through the streets to the place of execution – the first time he had seen his home town in fifteen years. He wore his black Jesuit gown and addressed the crowd in Spanish, Irish and English, cheerfully telling them that he had come to Ireland to defend the faith of the Holy Roman Church, the one true path to salvation. So moved were the crowd that the hangman fled and a passing fisherman was forced to do the job.

Influence
Left hanging on the gallows, the rope eventually broke and Dominic’s body fell to the ground. Under cover of darkness, local Catholics took his body away and buried him with respect in a secret place. From that day he 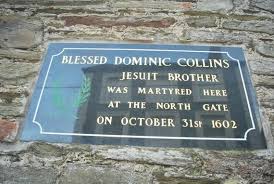 was venerated as a martyr in Youghal and his fame quickly spread throughout Ireland and Europe. In the Irish Colleges of Douai and Salamanca the Jesuits showed his portrait and many favours and cures were attributed to his intercession. Although used to the rough life of the army camp, Dominic always kept a strange innocence and gentleness. He is one of the most attractive of all the Irish martyrs.