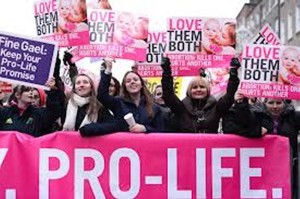 The Pro Life Campaign has expressed concern over the inclusion of the proposal for a citizens’ assembly on repealing the 8th Amendment in the draft programme for Government.

In a statement issued on Thursday evening, the Pro Life Campaign said that the proposed Citizens’ Assembly was never about taking a balanced look at the abortion issue or exploring everything that is positive about this life-saving provision.

Responding to the news that a Citizens’ Assembly will be included as part of the new programme for government, Cora Sherlock of the Pro Life Campaign said, “Since first mooted by Fine Gael, the Citizens’ Assembly proposal has always been about paving the way for removing the only remaining legal protection for the unborn child.”

She added, “For supporters of the Assembly to suggest otherwise is to mislead the public.”

“Usually referendums add protections to human rights.  In this case, any proposed referendum would be about undermining the most fundamental right of all, namely the right to life,” Ms Sherlock said.

“The Pro Life Campaign will work tirelessly to ensure that the public are not deceived about what this flawed process is really about.

She stressed that Fine Gael has no mandate for setting up the Citizens’ Assembly in this manner.

“In the recent general election when the issue of abortion came up on the doorsteps, it was overwhelmingly pro-life supporters who raised it. Those same supporters will stand up for the 8th Amendment and do all that is necessary to retain it so that mothers and unborn babies are fully protected in law,” the PLC spokeswoman said.