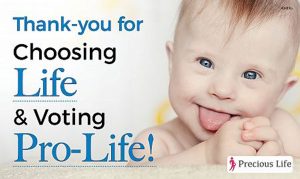 The Pro Life group, Precious Life, has said that the Northern Ireland Assembly election results are an endorsement of pro life parties.

Prior to the 5 May vote, Precious Life launched its ‘Your Vote Matters’ campaign, appealing to voters to vote pro life and distributing over 100,000 leaflets to homes, churches, and in city centres throughout the six counties.

Their website contained a comprehensive list of all the candidates in the election and where they stood on abortion.

Sinn Féin, the Alliance Party, the Greens and People Before Profit support greater access to abortion.

The Greens and People Before Profit won two seats each and Traditional Unionist Voice, one seat. The turnout was almost 60%.

Fifty nine of the 108 candidates elected oppose abortion (SDLP, DUP, 8 UUP Members of the Legislative Assembly and the TUV ). 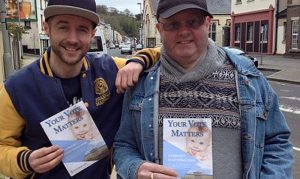 Volunteers from Precious Life distribute ‘Your vote matters’ leaflets in run up to 2016 Elections.

Reacting to the Assembly Election results, Bernadette Smyth, the director of Precious Life congratulated the newly elected Members of the Northern Ireland Assembly who had vowed to defend the right to life of all unborn children at Stormont.

“The DUP and SDLP have publicly made clear that they are pro-life parties,” she said.

“Precious Life are very hopeful that they will stand strong in their opposition to the plans of Sinn Féin and others to bring forward legislation to allow abortion in cases where an unborn child has been diagnosed with a life-limiting disability. We trust that they will not let their voters down.”

She appealed to the electorate to keep the pressure on political representatives to “ensure that they do not renege on their pro-life promises,” and invited the public to  attend the 10th Annual All-Ireland Rally for Life in Belfast on 2 July 2016.

Precious Life, founded by Bernadette Smyth in 1997, is the largest pro-life group in Northern Ireland.

Composed of people from all sections of the community, it is  non-denominational and non-party political.

The group believes that the dramatic drop in the numbers of women travelling from Northern Ireland to England for abortion is in part at least attributable to its activism, including the work it does on the streets.

In December 2014, Bernadette Smyth, was sentenced to 100-hours community service and a restraining order for harassing the previous head of the Marie Stopes clinic, Dawn Purvis.

The conviction was overturned in June last year in the Court of Appeal, when a judge ruled there was insufficient evidence that she harassed Dawn Purvis.