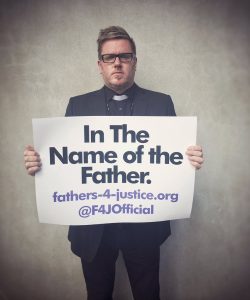 A man dressed as a priest interrupted the Rose of Tralee International Festival in Co Kerry on Monday night, waving a poster that read ‘In the name of the Father’.

The second generation Irishman’s family is from Sneem in Kerry and he visits there regularly.

He lives in Clapham in London and said he wanted to highlight the plight of separated fathers who have difficulty in gaining access to their children.

“The idea was to create awareness about a very serious social issue as there is a wall of silence in Ireland surrounding this particular issue and there is taboo and stigma,” Matt O’Connor, the protester told Catholicireland.net.

“So we were using the platform of the Rose of Tralee to try to warn people that their family is at risk of the cancer of family breakdown and of  fatherlessness.” 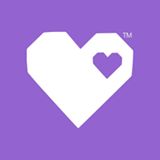 The 49-year-old father of three boys set up Justice4Fathers after having difficulties in his own family.

He told Catholicireland.net that he would have recited the ‘Our Father’ had he not been forcibly removed from the stage of Ireland’s much loved beauty pageant.

He said he dressed as a priest so he could more easily get past security at the Dome where the festival is held.

According to a statement by his controversial protest group, he “asked the audience to pray for the 1000s of fathers and children affected by family breakdown in Ireland.”

Fathers4Justice stated: “This is the new ‘Rising.’”

They claimed that 100,000 Irish children are “partitioned” from their fathers and denied their human rights.

“The Rose of Tralee has lots of beauty, but there is nothing beautiful about family law. We want equal rights for fathers in Ireland. It is a human right for children to see their fathers,” they stated.

Fathers4Justice was founded by Matt O’Connor in 2001 after he was denied access to his two boys, Daniel and Alexander, following a difficult divorce.

He wants to see both the State and Church supporting father’s rights to have access to their children.

For example most mothers automatically get custody of the children.

“We would expect the Catholic Church to be supporting defending Irish dads,” he said.

He said he would like to see priests and bishops speaking out about the issues of the day like father’s rights.

One of the group’s protests involved scaling the famous Church of England York Minster cathedral to highlight the Church’s failure to take the lead in lobbying the Government.

Matt O’Connor said that it is not unusual for fathers to be excluded from the Christening of their own child, and the Church could change that.

Jason Hatch, a Fathers 4 Justice campaigner, dressed as Batman protests on the balcony at Buckingham Palace

Since its founding in 2001, Fathers4Justice have been involved in a number of high profile protests in the UK such as the so called ‘superheroes’ protests involving  fathers dressing up as characters like Batman and climbing into the grounds of Buckingham Palace and Spiderman on a crane over Tower Bridge in London.

The campaign has also targeted politicians and one action involved throwing packages of flour dyed purple at the then prime minister Tony Blair.

He has accused politicians similarly and accused agents of the state, such as the courts, of trying to silence him.

The campaign in the UK has involved high profile fathers such as Bob Geldof.

In April of this year, Irish writer John Waters was among speakers at a public meeting titled ‘London: The Fatherless Capital.’

Now the campaign has come to Ireland and further protests will be held.