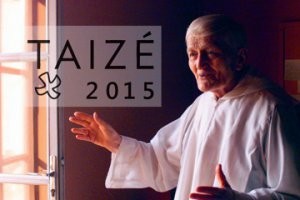 Taizé is having triple celebrations this year – starting from 12th May which is the centenary of the birth of Bro Roger Schutz.

People have been organising prayer services around the world and in Ireland. Organisers have issued an invitation to people to commit to an act of solidarity in commemoration of the anniversary of Bro Roger.

For a service on 10th May in Taizé in France, where Bro Roger set up his first community, the current leader of Taizé, Bro Alois, composed a prayer in which he asks for the Holy Spirit to help people witnesses to reconciliation in their daily lives.

“Make of us builders of unity among Christians where they are separated, bearers of peace among people when they are opposed. Help us to live in solidarity with those who are poor, be they near or far away,” he continues.

There was a special service St Paul’s Church, Arran Quay in Dublin last night, which is the venue for regular Taizé services which around 100 people attend.

Up to 300 attended the Good Friday ‘Way of the Cross’ at Phoenix Park with Catholic and Anglican archbishops earlier this year.

Fr Damian McNeice told CatholicIreland.net that at the service people were called “to commit to some act of solidarity or kindness in memory of Roger. Or to choose to love in a difficult situation and to create some form of a new solidarity wherever God wants us.”

He said that the prayer service and its meditative chants synonymous with Taizé also encourages people to reach out.

“Prayer is not a retreat from reality; for Bro Roger it is always an engagement with the deepest of what is in humanity, because you carry within yourself the woundedness of the broken body of Christ and all who suffer, particularly the innocent suffering, those who are bowed down by suffering and oppression,” he explained.

“Prayer is never a running away from that, prayer urges us to go back and do something about it.”

Fr McNeice goes to Taizé in France with young people regularly and many of the group who plan to go this year from Ballyboden parish were present at the service. 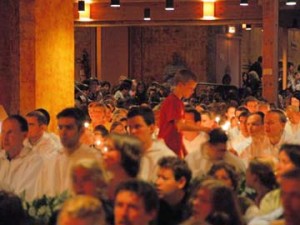 Another group from Ennis and Co Clare also hope to travel to Taizé with Fr Jerry Carey.

They held a service last Thursday 7th May at the Church of Our Lady, Roslevan to celebrate the legacy of Bro Roger. Around 40 teenagers and 20 adults attended.

“The great thing about Taizé is simplicity,” Fr Carey told CatholicIreland.net. “It is meditative, respectful, peaceful and then it brings calm and peace to the inner core.”

He explained that 3-4,000 people attend the Taizé meetings in France every week during the summer. He has been going to Taizé for 25 years now and has met Bro Roger several times.

“He revealed to me what the word communion meant, in the sense that he always referred to the community at Taizé as a group of men who lived the parable of communion,” he said.

He feels that his visits to Taizé helps him to keep going when he returns to his very busy parish. “It is the only place that I can find that sense of calm and peace,” he said.

Celebrations for the anniversary continue in Ireland with a service in New Ross on Friday 15th May at Good Counsel College Chapel among others.

Church groups and leaders have been recalling experiences of meeting Bro Roger.

Gabri Fallacara, who worked the Focolare’s Centro Uno for the unity of Christians, visited Taizé in 1974 and along with 40,000 other visitors was welcomed by large wooden signs with “Silence” written in various languages.

There were Catholics, Protestants, Anglicans, Orthodox, Jews, agnostics which mirrored the brothers living with Bro Roger, who was a Reformed Calvinist, she said.

According to Gabri Fallacara, “Schutz was always around. With his sweet and humble features that seemed to speak of God, he greeted each and every person.”

With Bro Roger, she said, a new era was inaugurated. He believed in the unity among Christians, and with others he set out to do what could be done immediately: praying.