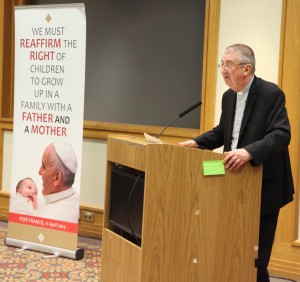 Archbishop Diarmuid Martin gives his address on the theme ‘The Teaching of the Church on Marriage Today’. Pic John McElroy.

The perfect family rarely exists and the Church must encounter families where they are at, the Primate of Ireland said in his address on the theme ‘The Teaching of the Church on Marriage Today’ on Thursday evening in Dublin.

Archbishop Diarmuid Martin told those gathered for the Iona Institute talk that all over the world families are struggling with poverty, unemployment and marginalisation, as well as emigration and the separation that this entails.

In the midst of these great challenges, great families exist and struggle and contribute to building up and sustaining society, he said.

Recalling last October’s Extraordinary Synod, the Archbishop said that the tone which Pope Francis wished to give the Synod was never condemnatory.

“The Church must listen to where God is speaking through the witness of those Christian married couples who struggle and fail and begin again.”

“We should be very realistic in our examination of the reality of the institution of marriage and family in society, but not get bogged down only with problems, but bring a message of hope and encouragement and support to families,” he commented.

He acknowledged that the results of the consultation that took place in advance of last year’s Extraordinary Synod showed that there is division within the Church.

“There is a gap between the Church’s teaching and what the experience of many in today’s world is.”

The same divisions emerged also during the Synod of Bishops itself. Many bishops spoke about an increase in co-habitation and in purely civil marriage among Catholics and many other bishops were surprised and at times scandalised that some seemed to take this change as something to be recognised and not simply condemned outright.

While the Church must reach out to encounter families where they are, Dr Martin said, that does not mean that you simply leave people where they are.

“The Church speaks of a law of gradualness, not in the sense that ‘anything goes’, but that we can be led, by the help of grace, to move step-by step towards living our Christian vocation more fully,” he said.

He also recalled that among the subjects discussed at the Synod was that of men and women with same sex orientation. 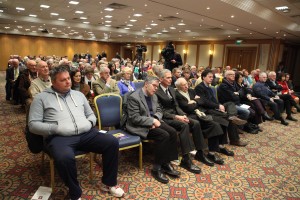 Iona Institute talk by Archbishop Diarmuid Martin on ‘The Teaching of the Church on Marriage Today’. Pic John McElroy.

“During the Synod’s discussion as to how to reach out to men and women of same sex orientation it was clearly and unanimously stressed by all that there is a radical difference between marriage between a man and a woman and the union of two people of the same sex.”

“Yet it was also stressed that the Church had to welcome people as they are.”

Setting out his opposition to any redefinition of marriage, he stated that an ethics of equality does not require uniformity.

“There can be an ethic of equality which is an ethic of recognising and respecting difference,” he said.

Dr Martin suggested that a pluralist society can be creative in finding ways in which people of same-sex orientation have their rights and their loving and caring relationships recognised and cherished in a culture of difference.

“I not saying that gay and lesbian people, are unloving or that their love is somehow deficient compared to others, I am talking about a uniqueness in the male-female relationship,” he said.

The Archbishop also revealed that he has received correspondence from people who support a no vote in the forthcoming marriage referendum where the language used is “not just intemperate but obnoxious, insulting and unchristian in regard to gay and lesbian people”.

He admonished his correspondents, warning them that if they use such language to support a position they feel is Christian, “then all I can say is that they have forgotten something essential about the Christian message”.

But the Archbishop also stated that much of the wider discussions on marriage and the family in Ireland today are polemical.

Appealing for the debate on marriage and the family to be respectful without intemperate language or one-liners aimed at stopping debate, the Primate of Ireland criticised the use of professional spin-doctors to brush aside people’s contributions which he said was not in the interests of public debate or democracy.

Dr Martin warned that discussion on the definitions of marriage require time and frank and balanced discussion as he warned that the normal parliamentary procedures in this debate seem rushed.

“The fundamental question for me concerns the nature of the relationship between male and female, which I hold is not simply a social construct but which is constitutive of human relations. What does it mean to be male and female?”

“There is something irreplaceable in that relationship between a man and a woman who commit to each other in love and who remain open to the transmission and the nurturing of human life, within an intergenerational framework which contributes to the stability of society.”

The Archbishop of Dublin also challenged the Children and Family Relationships Bill underlining that no person exists who is not the fruit of a male and a female.

“Even if it were possible to clone a child, that child would still bear the genetic imprint of a male and a female. Genetic parentage is not irrelevant,” he highlighted.

Some people spend their entire lives seeking their genetic parents, he noted and said this was not just out of a natural emotional desire but that knowledge of one’s genetic make-up can be vital when planning to have children.

“We are all children of a male and a female and this must have relevance to our understanding of the way children should be nurtured and educated. Genetic make-up is a fundamental dimension of the intergenerational reality of family,” he stated.

He stressed that all children, whatever the circumstances of their birth, should be loved unconditionally and treated with the same rights and dignity.

This applies also to their rights within the Church, he said as he recalled that Pope Francis had, on a number of occasions, spoken very strongly against any priest who might refuse baptism of a child simply because of the particular conjugal relationship of their parents or guardians.