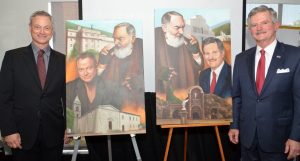 The American actor and Emmy Award winner Gary Sinise was one of two recipients of this year’s Saint Pio Award at a presentation ceremony in Washington at the end of May.

These include George Milton in the film ‘Of Mice and Men’, Lieutenant Dan Taylor in ‘Forrest Gump’ (for which he was nominated for the Academy Award for Best Supporting Actor), Harry S. Truman in ‘Truman’ (for which he won a Golden Globe), Ken Mattingly in ‘Apollo 13’, Detective Jimmy Shaker in ‘Ransom’, Detective Mac Taylor in the CBS series ‘CSI: NY’ (2004–13), and George C. Wallace in the television film ‘George Wallace’ (for which he won an Emmy).

In 2016, Sinise – who is also a director, and musician, along with being an Emmy Award winner and a Golden Globe Award winner – began starring in ‘Criminal Minds: Beyond Borders’. He is also known to be one of the greatest supporters and advocates for US veterans worldwide, and provides support to them through the Gary Sinise Foundation.

Just a few days after the world celebrated the 129th anniversary of the birth of Padre Pio of Pietrelcina, the Saint Pio Foundation organised its second Saint Pio Award Ceremony at the Café Milano in Washington DC.

More than one hundred guests participated at the event and meet the awardees and special guests of the event, among which were the acclaimed actors Joe Mantegna and Tony Lo Bianco, Cardinal Donald Wuerl, Archbishop of Washington, Hon Robert P. Astorino, Westchester County Executive (New York), Franco Nuschese, owner of Cafe Milano, and Fr Patrick Conroy, Chaplain of the US House of Representative.

Hon Jim Nicholson served as Secretary of the Department of Veterans Affairs from 2005 to  2007.

Prior to his tenure at the VA, he served as US Ambassador to the Holy See for nearly four years.

Speaking at the event, Maestro Luciano Lamonarca, Founder, President & CEO of the Saint Pio Foundation commented, “I thank from the bottom of my heart everyone who supported our event, especially the award winners, who with their inspiring presence contributed to our success.”

“We are proud to have founded this organization to promote our beloved Padre Pio, and we hope to ‘Bring relief from suffering to those in need’ in his name, in the US and abroad.”